Over the past two summers, our boys have been at an age where all three of them were mobile and active and had a lot of energy to burn on those long summer days. Even the youngest one at age two was ripping around the yard on a balance bike or climbing up into the “fort” at the top of our reclaimed swing set in an effort to keep up with his older brothers. Since Joe and I are trying our best to be good little homesteaders, our summer days are very busy with taking care of the animals, tending to the garden, preparing fresh food, putting up food for the winter, and everything else that comes along with running a household. In the interest of letting the kids get out their energy while we still have a chance at getting something done, we decided to institute the “free-range” policy for our children. Maybe you’ve heard of free-range chickens or guinea hens? This allows the birds to get some exercise and have access to fresh greens and bugs all day long. Why not for boys? They need fresh greens and bugs too, right? Just kidding, sort of 🙂 Now, please don’t judge. Or, at least, before you do, sit down and ask your grandparents or great-grandparents what their children did on those long summer days when they were growing up? And the simple reality is that you can’t be with all three of them at all times. So when one of the boys says to me, “Can I play outside?”, my response is usually, “Sure!”

The end result is usually some ridiculously dirty clothes (or naked boys and missing clothes), a lot of messes to clean up around the yard and the house, equal parts yelling at each other and working together as a team, a few narrow misses where we almost went to the ER, and some of the most creative ideas that the boys have ever come up with – for better or for worse. I love to peek out of the windows when they think I am not watching and see what they are up to. It is easy to imagine them all grown up as a team of engineers working together on a construction project, or an environmental research team out on an expedition to collect nature samples, or a group of scientists conducting an experiment. Here are some examples of what these crazy boys have come up with during their adventures together: 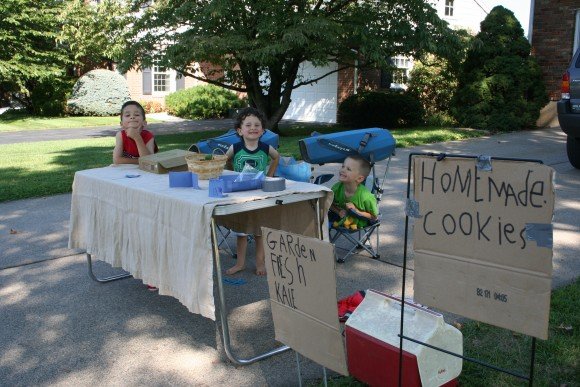 As you can see, when left to their own devices, the boys can be both a creative and dangerous team. My hope is that all of this unstructured and partially unsupervised play time in nature will allow them to explore new ideas, learn things that I cannot teach them and they will not learn in a book, and form a bond between brothers that can never be broken.

(I wish that I had more pictures to share of these magical moments but I am still learning to take a deep breath (and grab the camera!) when I come upon these brotherly creations instead of shouting something that I will later regret!)

Our youngest son is turning seven today, which is so hard for us to believe! …

Happy New Year’s Eve!  I can hardly believe that our week of holiday vacation is…