Even as a little kid, I quickly learned the value of a good pair of work gloves.  Be it raking the grass after Dad mowed our 1 acre yard, raking apples from our three huge crab apple trees in our back yard (which I hugely undervalued at the time…wish I had those back!), to splitting wood with my Dad and brothers, nothing was worse than the blisters that I would get in the webbing between my thumb and forefinger if I wasn’t wearing gloves.  Fast forward to some labor jobs that I took over summers during college, and work gloves were not only nice for comfort and avoiding blisters, but they were really important for safety when working around power tools and high energy sources.  Now, I wear gloves almost every time I go to work outside.  Even if it is just for some light gardening, I like the feeling of security and comfort that they provide.

The problem is, I am hard on gloves.  Really hard.  Truth is, most gloves that I have owned are lucky if they last a month or two, and if a glove was durable enough to endure the beating that I put on them, they tended to be bulky, uncomfortable, and useless for jobs that require any kind of tactile feeling in my fingers.  The most common failure point for my gloves is just at the inside tips of my right pointer finger and middle finger.

I started going through gloves so fast that it became a habit to just pick up a new pair every time I was at the hardware store; whatever the latest/greatest happened to be.  That became an expensive habit.  You name it, I have probably tried it.  While there is some prudence to the saying “you get what you pay for”, no matter how much they cost, almost every pair of gloves I have owned has blown out at that same point; inside tip of pointer finger and middle finger.  Until now!  Read below for a quick run-down of my favorites.

I used to own a pair of old school leather Carhartt gloves.  Nothing fancy, just tough, rugged leather work gloves.  These used to last me the better part of a summer working construction, but I found that for more moderate work that I did around the house, they were too bulky for routine use so I don’t get them out too often anymore except for really heavy duty jobs.  They are a also a little on the pricy end, usually in the $20 range.

My local hardware store carried a few nice versions of these gloves in a fitted variety.  Made with deer hide, they were soft, comfortable, and snug; allowing for a tight fit and good dexterity.  However, these were among the least durable that I have used, lasting only a month or so before the soft deer hide wore down, rending the gloves near useless. These were a little cheaper ($12-$15), but not worth replacing every month or two.

I saw these at the bigger box-hardware store, and figured that because they cost more, they must be better.  Ehhhht. Really nice fit and dexterity, and perhaps very slightly more durable than the Wells-Lamont (by a few days maybe), but not worth the extra price (most around $20).

Eventually, I decided to search online for whatever the great masses of Amazon had to say about the search for the “best work gloves”.  This search yielded a hit on Workright gloves, which ended up being my favorite for a couple of years.  Again, good fit and dexterity, reasonably priced ($15), and lasted twice as long as their other “form fitting” contemporaries of Wells-Lamont and Mechanix.  Eventually, these too yielded to the finger blowouts, but I enjoyed a few pairs of these.

Close to a year ago, I was at the hardware store and saw a pair of these Madgrips gloves, which are basically a cloth knit glove with a soft rubber coating.  I tried them on, and while they looked a little more “Terminator” than I thought was necessary for a work glove, they had a really nice fit, excellent tactile feel, and as you could imagine, an amazing no-slip grip.  On further research, it seems these gloves are popular among obstacle racers (think Tuff Mudder) due to their extreme grip and snug fit.  I found them to be extremely comfortable, and after nearly 9 months of pretty hard use, show very little sign of the normal blow outs.  At $12-$15, the only downside to that I have seen with these guys is that they don’t breathe very well (get a little stinky after a long day of hauling mulch in the summer) and are not as puncture resistant as leather gloves might be (not unheard of to get stuck by a briar when pulling out bramble bushes).  So they are not ideal for all applications, but for 95% of my jobs, these are my go to gloves these days.

Here is a quick summary of my thoughts.  In short, there is probably no glove that is perfect for all situations.  If you are doing a big, nasty, rough construction job, the old school heavy duty Carhartt style leather gloves are probably your best bet.  For almost anything else, it is hard to do better than the Madgrips, especially for more moderate work around the homestead.  That said, if you have a favorite workglove that I haven’t listed, let me know!  I’m always up for trying something new. 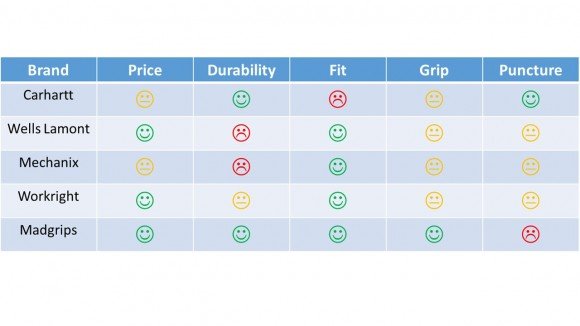 Spring is (supposedly) in full swing now, even though it is snowing outside as I…

For as long as I can remember, I have had problems with strong scents in…

We have been experiencing some unseasonably warm temperatures in Eastern PA, with the high reaching…